Ever since I did the triathlon relay in 2011, I’ve had my eye on a marathon relay. Not all marathons offer them but it seemed like such a fun way to bond with my friends, to push hard for a greater result – and frankly, a far more enjoyable way to complete a marathon. At a race expo last summer I saw that the Carmel Marathon (a fairly new race itself) was going to offer a relay option this year. I talked some friends into it and as of September we were signed up!

We drove down Friday after everyone was done with work and had our kids all settled in with Dad. I was impressed with the size of the race expo considering the fairly small size of the race (approx 3500 runners for three events). I was a little disappointed that there were so many booths that had already closed up for the night (we arrived in the last hour of the expo) but I understood. The race shirt was nice but there were no other perks for runners. They did have ribbons in Boston colors to wear and we each picked up those. And one of us picked up some Boston strong bracelets but I think they’re still in someone’s pocket. All in all, a good pre-race experience. Especially since there was a brewery just down the street for a fun girls’ night out dinner:

It’s a little sad that it takes a two-hour drive and race training just to get us out to dinner together.

About a month ago we met for lunch and I brought four playing cards (ace – four), placed them face-down on the table and we drew blind for the relay legs. Here’s how it ended up. 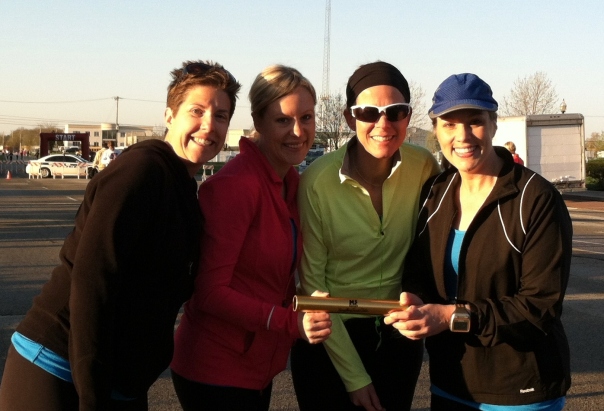 Leg 1: 6.9 miles
My friend Barb was up first. They had batons for us to carry in the race and while at first that seemed really fun, the reality of carrying it while running for an hour or more did not seem so fun. We made a last minute decision to not carry the baton and just use it for the transfers. That was one of our best decisions of the day. We still got to do the fun hand-off but didn’t have to carry that thing all the time. Barb had a fantastic run!! She started our team off strong but most importantly, she had a PR run maintaining a fast pace with ease – she didn’t even look tired at her finish. She surprised us with how early she came around the corner at the transition area but we pulled it together and completed our baton transfer.

Leg 2: 8.1 miles
Lisa (our second runner) didn’t have as much time to prepare as I’m sure she would have liked and said it took her a few minutes to get into her running groove. That’s when the hills started. Looking at the elevation chart after the race, Lisa drew the worst leg. Not only was it the longest mileage, it was all uphill. While the rest of us had some rollers, she had hill after hill after hill. And her ipod died so she lost her music and her split times to help guide her. Even with the surprising climbs and unexpected fast start, she still finished right around the time we expected her which makes for a speedy 8 miles. I’m even more impressed that she maintained such a fast pace while climbing up hills all morning. Whew!

Leg 3: 7 miles
I was our third runner and obviously had two great runs to live up to. Waiting for Lisa and watching other teams do their transfer was so exciting. When it came to my turn I found myself yelling and cheering and wanting to hear all about Lisa’s run. But I had to start running of course! I grabbed the baton… handed it off to Barb 20 feet later… and was off! It’s a funny way to start a race because you still have all the adrenaline of the race start but none of the crowds. In fact, I had no one by my for the first mile – I could see a few people ahead of me but there was no one near me. By the time my leg of the relay came around we were right in the middle of the marathoners looking to finish in the 4:30 range. They started 30 minutes before us but as the day went on we caught up. That meant that I ended up passing a lot of runners. After all, my leg was in the 15-23 mile range so they were getting tired and I had fresh legs. As much fun as it is to pass runners, I praised every single marathoner that I passed and made sure they knew I was a relay runner so they wouldn’t get discouraged.

I am very happy with my run. The first three miles had some hills – nothing steep though, just long climbs. And the last half of the run was flat – the wind bothered me occasionally but I just kept reminding myself that it was nothing like my last windy race and moved on. My first two miles were in the 10-10:15 pace range. I consciously slowed down a bit for miles 3-4 just because I wanted to make sure I could finish strong, still I ran those two miles in the 10:30 range. And then I gradually picked up speed for the last three miles. My 7th mile was a 9:55 and my final .6 was a 9:30. Yes… that’s right, my final .6. They had to make some last minute changes to the course because of flooding and my leg was 7.6 miles – and that’s with running tangents. I was struggling a bit mentally since I was running hard with the goal of finishing at 7 miles only to have no transition area in sight at that point! I didn’t let up though and was more than happy to hand off the baton to our final runner. (Oh and when I looked at my data afterwards, I realized that I had a 10K PR: 1:03:45. Makes me think I might just be able to pull off that sub-60 minute 10K if I really focus on it.)

Leg 4: 4.2 miles
Debbie grabbed the baton and opted to carry it for her entire run. We weren’t sure we’d be able to get back up to the finish in time to watch her cross so she carried it to make sure our finishing picture would have the baton in it. With the shortest leg, she was hoping to really push her pace hard and she certainly did! We got there about 10 minutes before we expected to see her and were able to all run in the finish together. That made it even more fun – to run the last 20 yards together.

We all had very strong, great runs and finished the marathon in 4:15:07. That put us in the middle third of the marathon relay teams. Solid race-day performance. 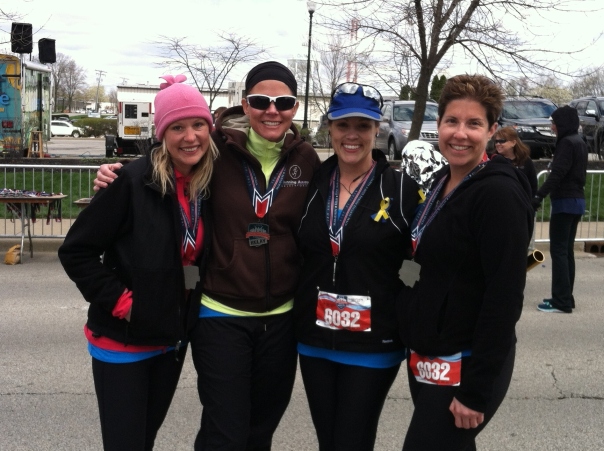 I mentioned that not carrying the baton was one of our best decisions of the day. The other best decision? Driving from transition to transition. They offered shuttle buses but they only took runners from the start to their transition area (and back afterwards). That meant that those runners were separated from their teammates (often for hours) and standing outside in the chilly, windy weather getting stiff before their run. That didn’t sound very fun. We drove which just added to the adventure and fun. Plus, driving gave us the options of staying warm, using indoor plumbing and stopping for snacks whenever we felt like it!

Quick note about race organization: All the volunteers I came across were pleasant and helpful. The police officers did a great job keeping the course open and all had encouraging words when I passed – and I thanked every one of the officers and volunteers as I ran by. There was plenty of food at the finish line – cookies, granola bars, fruit snacks, water & chocolate milk, pizza… good spread. I think there might have been a free beer somewhere but we were chilly (temps were in the 30s with a brisk wind) so we got our medals and a few snacks and left. Well, we gave ourselves our own race reward before hitting the Interstate: 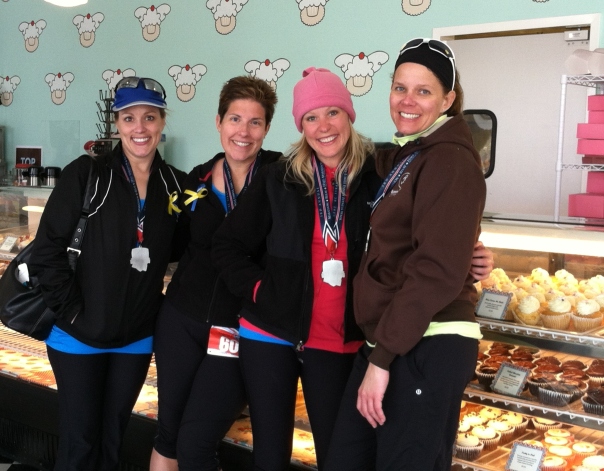 The marathon relay was one of the most fun races I’ve ever run. Breaking down each leg with my friends, cheering them on, screaming like a maniac at the transitions, running hard for a bigger goal… it was both an accomplishment and a blast. In fact, I had so much fun on this relay that I’m itching to do another. I’ve officially got my eyes on Ragnar. Which gives me a year to convince some other runners to hit the road with me.